11-29-13 21:30:  Jon Kimmey and Jocie Ortman were our shooters, along with Liz Cortez on FLIR, Dominic Zimmerman on 6.8, and Austin night vision spotting. We enjoyed a great night under the stars as we searched for activity on the farm. The shooters took sometime at the range to become accustomed to the systems, they practiced well.

Unfortunately we covered the entire hunting route with no luck, of course many herds of deer, when we circled around towards the South road for the final sweep, when Liz caught 3 hogs in the FLIR and we raced towards them to divide them between the road and fence-line full of brush. We were a hair late, fired a few shots before  they bolted in front of the truck and into the safety of the brush on the other side of the fence.

There’s talk that one was hit, but we weren’t going to search another property in order to find out. Overall, it was a relaxing drive under the cool night sky, with a climatic end. Letting our first time shooters enjoy some of the action. 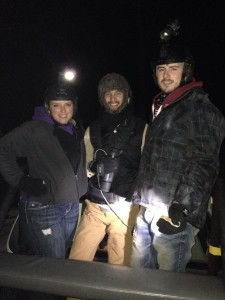 11-28-13 22:00 (1) : Erin Wyldes (AR 15) and Dominic Zimmerman (AK) shooting. Austin borders on FLIR.  Jon Kimmey on 6.8, Liz Cortes for the ride, and Kristen Brown shot-gun with night vision spotting.  We warmed the lazers with hand warmers allowing us to have stronger lazers. After a couple practice rounds at the range we took off.

Checking the duck pond, along with the beginning of the South road we spotted nothing but herds of deer. Everywhere. Mike decided Creek Trail was our best bet, so we went over the cattle-guards and back to the opening of Creek Trail. It was begging to look like a hunt with no shots fired, when Erin spotted a large black boar near a tree by a fence line 75+ yrds away. Austin locked on it with the FLIR. The chase began. 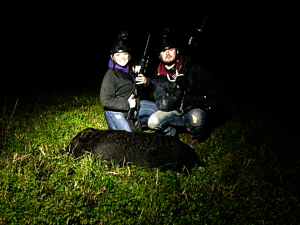 Erin fired off a few rounds, when the headlights came on, offering the shooters more clarity. We hit a large mud puddle, night visions and windshield were covered in muddy water. The AR 15 jammed, it was up to Dominic to bring down the boar. When it all ended we had brought down a large boar, and got nice and muddy in the process. 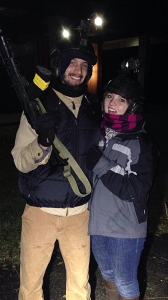 Kristen Brown and Austin Borders shooting. Dominic Zimmerman on the FLIR, Erin Wyldes on 6.8. Liz Cortez and John Kimmy along for the ride; Jocie Ortman as well. We started out on a very cold night hunt to the range check the lasers, and get all the gear set. As we discovered before the lazers do not like to shine very bright in the cold, but we worked out all the kinks and took off.

We went down the South road, as usual route. With no luck that direction, we assumed that because of the cold and location of pecans, acorns (ect) that Creek Trails would continue to be our sweet spot for the final hunts of this month. Sure enough, as we rounded the corner and passed the brush, there was a nice group of year-ling sized hogs. With some great chasing and team work, Austin and Kristen brought down the three pigs, and of course with the help of the Night Hawk. 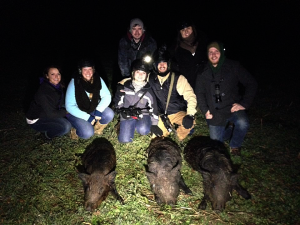 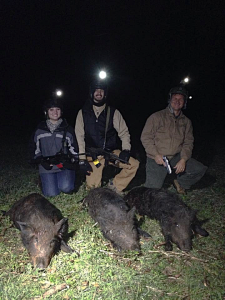 11/22/13 21:30 (2). Matt Mullahy, Jeff and Cherie Bernard, Bryan and Kathy Wyldes, Siera Bently, Paxton Densmore and Erin Wyldes on FLIR. We had a full truck that night, but nothing prepared us for the sudden weather change that came in that morning, dropping the temperature somewhere in the 30’s. With Cherie and Kathy in the cab, Jeff and Matt on the AK and AR, Erin on FLIR. Along with Bryan with the 6.8 and Siera and Paxton spotting we manage to make it through the cold, barely, and have quite the night. As we went to the range to let the shooter get accustomed to their rig, we had some technical difficulties as our night vision is a new addition for our shooters, and there was a sweet, biting mist falling wetting the lenses. The cold also affected the lazers, but we worked out the kinks and got the crew on the road. 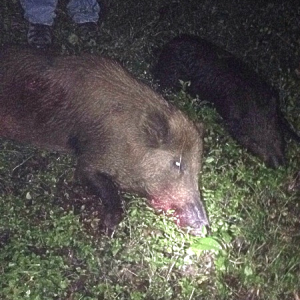 Per usual route, we took the Crack House Trail and the South road spotting and enduring through the chill, but Erin had trouble with the FLIR mainly because the day had been so cold that there was no contrast in the screen making it hard to identify where she was looking. And with no hogs to be found, the crew moved over to Creek Trail. 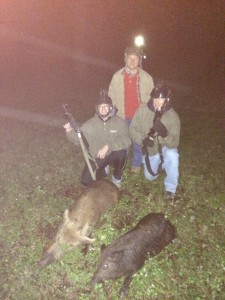 The chase began and the ground was cold and soaked as we charged towards three hogs. With night vision lenses wet and muddy water flying, we made a few sharp turns right as the hog took off, and the shooters unloaded. Bouncing through the ditches, making Bryan crack up as he watched in the back, dodging trees the lights came on, offering clearer shots under the circumstances and the two pigs were brought down.

Matt was ready for a couple more hours, but the crew were frozen solid and called it a night. The word to describe the hunt was “fun and bizzarre”. Over all, these Iowan friends and family went to bed talking about the hunt, and woke up laughing and with a good recap. It’s safe to say Texas made a good impression, and they will be back. 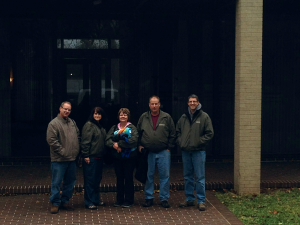 11/21/13 21:00-22:00 (2). Ben Hutchins and his father Bob, Paxton Densmore on the FLIR, and Erin Wyldes spotting with the 6.8. The guys had spent some time at the range earlier that day, gearing up for a great hunt that night. With the weather rather favorable and barely any fog, the night started out great. With a few practice shots at the range, Ben on the AK and Bob on the AR, the gentlemen were solid shooters and we knew the night would go quickly once the hogs were found. 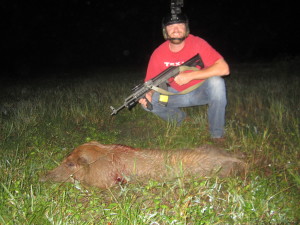 We turned and went to Creek Trail hoping to stumble on some hogs in the brush, when a large hog was sighted but per usual the risk of Creek Trail we lost him in the creek, which can happen 50/50 of the time. Mike always works hard to keep along-side the hog or maneuver so the hog can’t break left, but that also requires a sometimes precarious chase. Judging on how far away the hog is, and how clear we are to chase we always keep safety a first priority. But to our surprise, near Jones’ ditch another large hog was spotted and went south into the ranch!We began en route as usual, passing the duck pond when a small chocolate brown boar was spotted with no time at all, we were on him and 4 rounds later Ben dropped him. We were all impressed with his shooting and use if the AK. 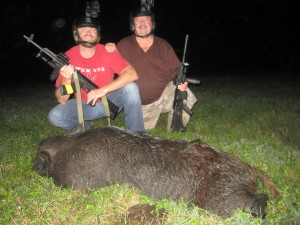 With a long chase, through the fence, around the oak trees and yards away, Mike made it up to the hog for some shots to be fired. With a bouncy ride, and the wind in our faces, Ben made some shots working to slow the hog down and Bob made the coup de gras. Giving our crew quite the hunt for a beautiful night. Much appreciation to our sharp shooting guests!

11/6/13 21:30-23:30 (14). Ron Cowart, Vic Edwards our shooters, Justus on FLIR and Paxton Densmore in the cab, Erin Wyldes spotting with nightvision, and Damien spotting with night vision scope.  Ron on AR-15 Vic on M1A. The day started out with warm temperatures, and slowly went down with a sharp breeze but we geared up and were ready to go out. 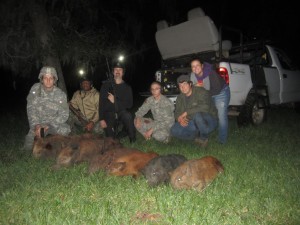 We started out with Vic pointing out there was movement near the duck pond. We zeroed in and counted 6 or 7 going toward the fence. We got to cattle guard as the herd moved under the fence. A big one broke left of the road, we chased it. Then we made a loop around some trees, as we were chasing a few yearlings and another large hog. The shooters dropped four babies and ran out of amo. Mike grabbed Nighthawk and brought down a large hog, along with Justus pulled out the 45 and helped take down one at the fence. We stopped to gather them all up.

We went through and checked  Section B,  and returned traveling down the South road, when a group was spotted near crackhouse trail.  We took off through the ditch, toward the heard that was at 2 o’clock. One broke off while the others ran north through trees, we chased them up road, then jumped behind one which they hit near the trap and Mike ran over it.  While chasing the third we went over the cattle guard around the pen and over to the Creek Trail. 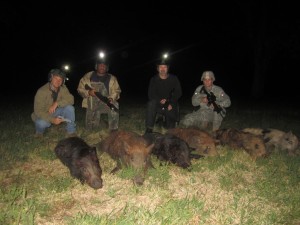 As we scouted for the loan wondering hog we came upon a nice group of 12 or more. We took a moment to gather our things and charged 75 yards ahead. The exhilarating chase was on! Three of the pig split up from the herd and broke left while some continued straight. The Shooters, Ron and Vic were on point as they continued to bring down the pigs on both sides of the truck. Justus yelled inside the cab for Paxton to send out his AR. With guns all around, the Mike with Nighthawk, brought down two. A large hog was shot in the hind end and run over. Another was dropped, the lights came on so Justus could take care of a few. The final hog from that herd took several hits, and finally went down into a bush. 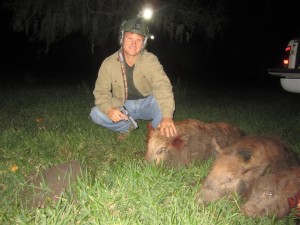 We gathered them up for pictures, and enjoyed talking about each shot made and how exciting this was. We also went back to crackhouse trail and the south road to check the two from trip back, and found one immobilized. It had been run over, Damien jumped out and administered the final shot.

All in all, it was a great hunt! 14 hogs from the night. The herds were out and the crew was on fire!