3/13/14 21:30 (1+)  Visitors from Iowa made the 18 hours drive south to enjoy some warm Texas weather and hopefully get their hands a little dirty, hog hunting with the crew. Grateful to have them as they really enjoyed an exciting adventure with us. Our Northern  friends included: A-crew member Erin Wyldes’ parents Bryan and Kathy Wyldes, Jeff Hamann, Mark Eigsti and Chuck Crow. 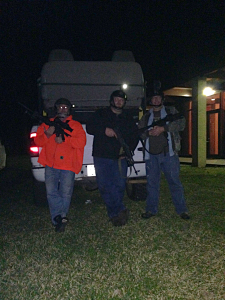 We hunted a few nights previous and only ran into on hog hundreds of yards away, who was spooked and made his way safely back into the mott on the South Road. However, the team was determined to get some action before their trip was over. They gathered a bunch of strawberry jello and diligently put it out at all the right stops. Thankfully it paid off well.

We started out somewhat early in the night, so in order to make sure all the night life had a chance to come alive, we start the Creek Trail. Justus Densmore driving, Erin Wyldes on the FLIR, and Paxton Densmore on the look out we made our way around the creek, and cut through the farm headed towards the fence line and the South Road. 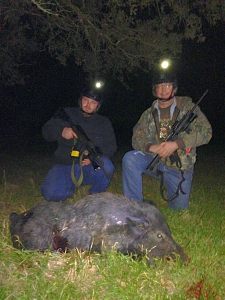 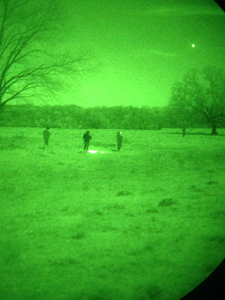 We continued the hunt toward the grass fields, and section C. With the wind in our favor, Mark Eigsty was able to make it to the fenceline of Section C and snipe a small herd of 4 hogs. He made impact with one hog, but it was lost in the mott. 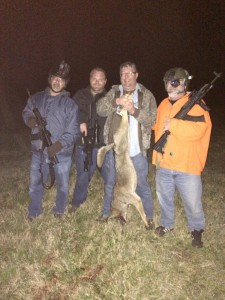