AUGUST (PFR 5:5 ; 8 kills) 105 kills so far in 2013.  They have not gotten problematic on the farms, even after rains which is surprising.  They are around but they don’t seem to be rooting.  It is too late in year for them to be on ranch until new acorns fall in Oct. 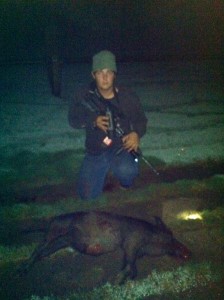 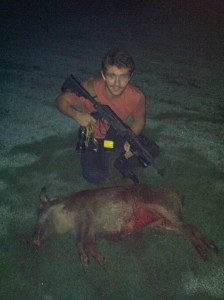 On South road amongst cattle suddenly saw HUGE boar standing atop spoil bank.  He went for the fence line and they didn’t get guns into play until he crossed fence, but I turned lights off and Taylor went to the scope and put him down!  She was using 6.8 with 110s.  Megan got some shots into him as well with PVS-14 mounted on AR.  He turned-out to be one of the biggest we have ever gotten to date. Then checking farms we found a sow with young on South fence on Sec B.  Drove through fields up to within 50-75 and let Taylor shoot rested.  She followed-up well and got one while running. 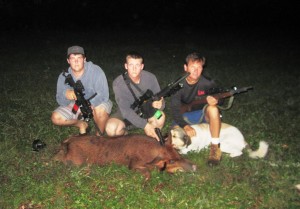 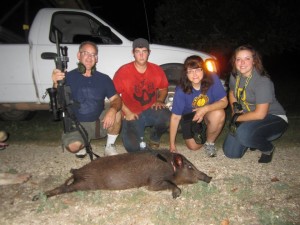 8/1/13  (2) Andrew Straub Bachelor Party.  I was in Athens, GA dealing with an accident.  Joe Johnson drove, Justus Densmore ran FLIR.  They found a boar in Bluestem Meadow and had to chase but finally got him.  Switched shooters then found small group on back of Sec B came around from C and got one as they tried to get across fence on South road.  Bachelor party was a success.