JUNE 2013 – (PFR 7:7; 29 kills – new June record!) Continued to be amazingly good!  Found and killed pigs every time we went out!  They seem to be going-back to the trees to find nuts that have been laying there since fall?  Continue to see them in the fields, and the fence line virtually every time we go down South road. 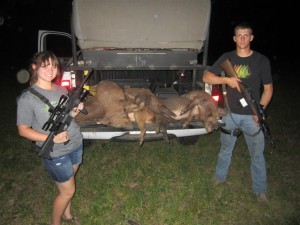 It was a wild chase, I actually killed 2 simultaneously by running-over them!  Kristen got her hits with green laser, she was very excited.  Justus used M1A with green laser – said was it greatness.  Dominic was running the FLIR and we found stragglers pretty far out on ranch.  Earlier Mikayla made solo shot on Parmer w/6.8 on a good-sized boar. 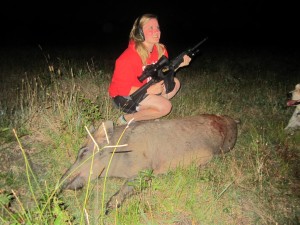 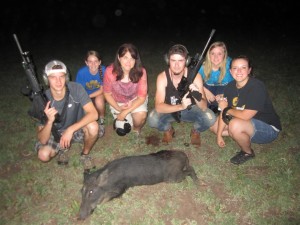 Then onto Sec A we saw a solo, tried to get downwind but irrigated zoysia was in my way and he smelled us and ran.  I gave Austin some still shots but don’t know if he connected.

6/17/13 (1) 00:00 Me alone checking farms because they have been hitting, but bright moonlight, no pigs.  Saw solo in the field across from South road, walked down the road for it. Maggie barked, he started to run so I took a shot, in front of his nose and hit him.  After squealing he stood up and I hit him I shoulder/neck and he began kicking.  System worked very well,  I didn’t use IR light.  Definitely want  a Pelican case and duct-tape brass catcher?

6/11/13 (3) 22:30 Joe Johnson, Paxton Densmore, Brandon.  Checking farms because Allenhurst Sec. A#10 was hit hard.  Solo in bluestem meadow got away, there was a pair by creek on Sec A got away, none on farm fields.  We rode creek and found small group near Joe’s track, JRJ took a still shot then pursuit.  Got 2 pretty quickly, 3rd probably hit as reached creek. Paxton scanned and found another heading South, we tracked him down in middle of ranch across fence after Live Oaks.  That was the first night using magnifier w/PVS-14 and we lost it!

6/8/13 (3) 00:00 Alone checking after rain.  Missed a solo near crackhouse corner he was running – I should have jumped-out and fired rifle but I tried to chase.  I found a small group on across the fence, as I walked out they crossed onto Allenhurst Sec. B#10-12.  I followed fence about 500yds then fired from ~50yrds?  Two hits but nothing dropped?  I used light which was great for seeing them but caused me to lose them in the smoke (Dang it!  IR OFF to fire at multiples). 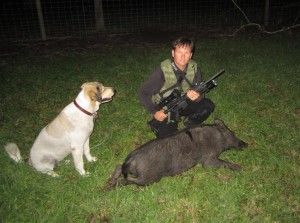 Heard a huge splash behind me and whirled around, took too long to locate (IR light was disorienting, FOV very narrow).  I finally grabbed PVS-14 to find the hog.I fired as he ran.  Something still off: scope?   Later took shots at a possum 150 yrd in a field, was shooting high? On way out I got a solo by a fallen tree.

6/2/13 (10) Erin Wyldes, Jessica, Justus and Paxton.  Especially epic hunt – Erin is hooked!  Out on South road, Erin took a still shot on huge boar in Bluestem Meadow – 200+yds!  We could see he was hit (really great shot), but he went into Mott. 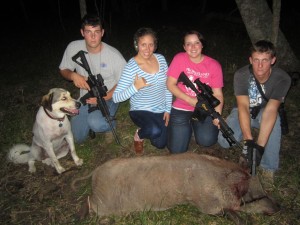 We went all the way around and found him laying down in Mott with the FLIR.  Justus, Erin, Paxton walked-in, he jumped up, Justus gave chase w/45 and he actually turned and ran at Justus, as Justus retreated while firing.  Was perhaps the biggest boar we have seen to date?

Jessica, the Densmore’s friend from Hawaii, hadn’t done anything, so we went out to go look for more hogs, but we drove perhaps 50 yds when Justsus found another pig under tree in the next Mott – we had to chase this one and I guessed he might pop out of the other side of Mott and circled around, still in dark.  He popped-out in front of us headed for WCS.  Justus had to put some rounds on him to get him down then Jessica administered the Coup ‘d gras with AR. 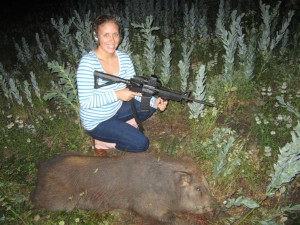 We were finished hunting and it was only 11:00!  We returned to the ranch front with lights on when suddenly, in front of glasshouse a herd was running right beside us!  I grabbed Night Hawk thinking I was the only one but the girls grabbed their guns and got into the fight.  Paxton had no gun so after shooting a couple, I handed him the Night Hawk and mag.

Everybody made hits, I ran-over one, Paxton ended-up trying to climb the fence to get the last one which was hit but got under fence.  Incredibly exciting, wild, chaotic chase.  Call it 8, we collected 6 for the pic.  Equipment and tactics all worked to design, Erin got the green laser on the 6.8, it was beautiful! 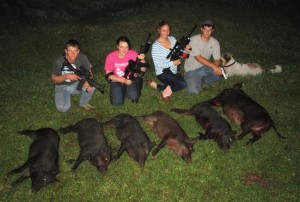